A 51-year-old British pilot has taken off on a solo journey to retrace the historic 1928 flight of Lady Mary Heath from South Africa to the United Kingdom. 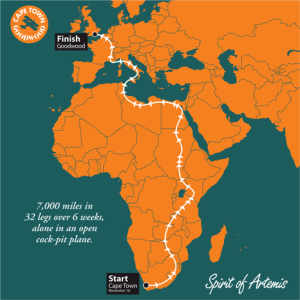 Tracey Curtis-Taylor took off from Cape Town on Nov. 2 in a reconditioned 1942 Boeing Stearman open-cockpit biplane.

With a maximum speed of just 150 kilometres an hour, her aircraft, the Spirit of Artemis, is not expected to arrive at her destination in Goodwood near London before mid-December.

By then she would have flown more than 11,000 kilometres and made 32 stops. Currently commercial flights take about 12 hours, non-stop.

The historic flight of 1928

Lady Heath was the first person to fly solo a small open-cockpit aircraft from Cape Town to London. Curtis-Taylor has the luxury of a GPS on board, while Lady Heath had just an atlas. “It’s a little bit bigger and more stable than the one Lady Heath flew but very much in the spirit — all stick and rudder stuff,” Curtis-Taylor said before departure.

“We hope this journey inspires people along the route to learn more about the remarkable history of aviation and the role Boeing has played in the past,” said Boeing Military Aircraft president Chris Chadwick.

A biography posted on the flight website says Curtis-Taylor was born in Britain and spent her childhood in Canada before moving to New Zealand in her early 20s. She has since settled back in Britain.

The Spirit of Artemis has been fitted with cameras and the aircraft is being followed by a film crew in a chase plane.

The footage will become part of a documentary on the flight planned for release early next year.