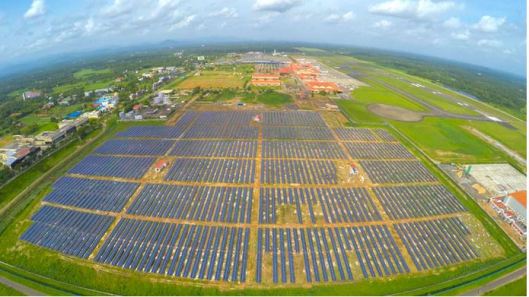 Cochin International Airport (COK) in southern India was opened just 16 years ago. This week it is celebrating a major environmental milestone – it has become the world’s first fully solar-powered airport.

More than 46,000 solar panels laid across 45 acres are generating 12MW of power, enough to run the airport smoothly.

“Now, Cochin airport will have 50,000 to 60,000 units of electricity per day to be consumed for all its operational functions, which technically make the airport absolutely power neutral,” its operator, Cochin International Airport Ltd., said in a release.

CIAL has been a trendsetter since its launch in the late 1990s. Cochin is the first Indian airport to be built under a public-private partnership model.

The company forecasts the project will help mitigate carbon emissions by more than 300,000 tonnes in the next 25 years. That is equivalent to planting three million trees, it said.

The busiest airport in Kerala state and the fourth largest in India, Cochin handled nearly seven million passengers in 2014-15.

The project was built by Bosch Energy and Building Solutions.

Images are courtesy of CIAL.