The all-new CS100 is going to Dubai, after all.

Initially Bombardier had decided to send just the Q400 turboprop,
Learjet 75, Challenger 350 and Global 6000 to the Dubai Airshow.

Today, the Canadian aircraft maker announced that the CS100, in the livery of launch customer SWISS, will be on static display at the show.

The Bombardier lineup will also feature a CRJ900. 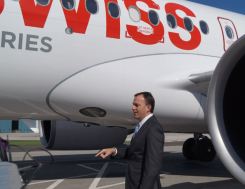 “Recognized worldwide as a premier venue for meeting key industry leaders, the Dubai Airshow also represents a great venue and opportunity for us to display our lineup of aircraft and provide an update on the exciting developments ongoing with C Series aircraft’s certification program,” said Fred Cromer, president of Bombardier Commercial Aircraft.

“Additionally, it’s a great opportunity to showcase the Q400 aircraft and CRJ900 aircraft’s performance capabilities, making them ideal for different types of operations in a diverse region.”

The CS100 and CS300 made their airshow debut in Paris this summer, but Bombardier was unable to win any new orders at Le Bourget.

Cost overruns, long delays and most crucially a lack of new orders have beset the CSeries program.

A Phenom 100E in the Emirates Flight Training Academy’s livery will be on static display at the Dubai Airshow, which runs from Nov. 8 through Nov. 12.

The Phenom 100E image is courtesy of Embraer.