DUBAI – The world’s largest international airline is adding the Airbus A350-900 extra widebody aircraft to it fleet.

Emirates Airline announced a firm order for 50 A350-900 XWB aircraft worth $16 billion at the Dubai Airshow on Monday.

The airplanes will be powered by Rolls-Royce Trent XWB engines. Delivery is expected to begin in May 2023 and will continue through 2028, the airline said.

“Complementing our A380s and 777s, the A350s will give us added operational flexibility in terms of capacity, range and deployment,” said Sheikh Ahmed.

“In effect, we are strengthening our business model to provide efficient and comfortable air transport services to, and through, our Dubai hub.”

Faury said the A350 will bring unbeatable economics and environmental benefits to Emirates. The airline operates an all-widebody fleet comprising the Airbus A380 and the Boeing 777. 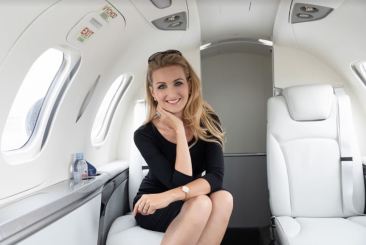 The Czech high-flier behind the Sapphire Pegasus business aviation awards is now making headlines as the author of JetBook.

The latest edition of the luxury aircraft and helicopter guide will be unveiled at the European Business Aviation Convention and Exhibition, EBACE 2018, in Geneva next week ahead of its official release in summer.

“Aviation has always been a huge passion of mine, and JetBook is a book that helps the industry by making it easier to fulfill people’s dreams of owning a private jet or helicopter,” Antonia Lukacinova said.

“There is no other guide on the market that offers such a comprehensive overview of the industry today.”

The 232-page book features 55 business jets and 20 helicopters as well as exclusive photos and interviews.

“JetBook is the jewel in our crown. We intend to support it with a wealth of up-to-date articles and information about the latest aircraft, along with lifestyle articles in our upcoming JetBook Life series,” said Lukacinova, who has been working in business aviation in the Czech Republic since 2004.

She also founded the Sapphire Pegasus Awards, which honors outstanding performances by companies and individuals in business aviation.

This year’s awards will be announced at EBACE on Tuesday. The winners were chosen from 74 nominees via an online ballot by more than 60,000 voters.

Photos are courtesy of Media Tribune and Sapphire Pegasus.

An ATR “green” aircraft has made its first flight as part of Europe’s Clean Sky initiative.

ATR said the purpose was to test new and more effective composite insulating materials and sensors integrated into a panel of the airplane’s forward fuselage section.

“The objective of such advanced technologies is to reduce the aircraft weight, fuel consumption, emissions and noise level.”

ATR has been part of the project financed by the aeronautical industry and by the European Union since its launch in 2008. The aim is to reduce emissions and noise pollution by half by 2020 from 2000 levels.

“The outcome opens the door to further improvement to the environmentally friendly planes people expect.”

A second flight, planned for later this year, will check out improvements to the electrical distribution, energy dispersal and the air conditioning systems.

ATR is jointly owned by Airbus Group and Alenia Aermacchi of Europe. It has sold more than 1,500 aircraft to 190 airlines.

Images are courtesy of ATR and Clean Sky.