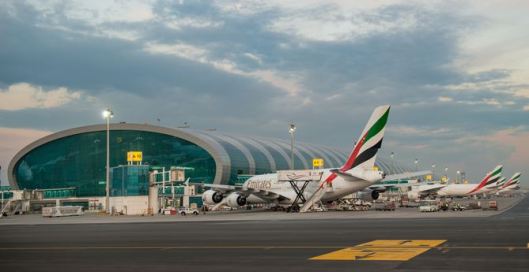 “The shared goal is to make Dubai a global centre of aviation and we are nearing that goal thanks to an open skies policy, a friendly business environment, Dubai’s growing attractiveness as a centre for trade, commerce and tourism, growing network connectivity due to the rapid expansion of Emirates and flydubai and timely investment in aviation infrastructure.”

CEO Paul Griffiths said the rapid growth was expected to continue this year.

“Today we are also releasing our projections for 2015 traffic at Dubai International which forecast 79 million passengers,” he said.

“We will have more flights connecting more people to more destinations.”

Construction of the second phase of that airport is now underway.

Once completed, officials say, the airport will be able to handle 160 million passengers a year. It will also have the capacity to handle 12 million tonnes of cargo.

Images are courtesy of Dubai Airports.

The A319 cabin. Qatar Airways Photo.

All-business class flights have been operating in several parts of the world for years.

Now Qatar Airways is set to become the first airline in the Middle East to offer the service.

The airline says it will operate a daily business-class only flight from its hub in Doha (DOH) to London Heathrow (LHR) this spring.

“The new service will be the first of its kind in the Middle East, commencing from 15 May 2014, with an Airbus A319 aircraft fitted with an all-business class, single aisle, 2–2 seating configuration offering 40 seats,” the airline said Tuesday.