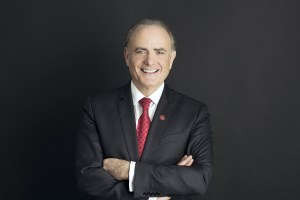 Just last week, Air Canada president and CEO Calin Rovinescu was named the CEO of the Year by the Globe and Mail’s Report on Business magazine.

This week, the airline is celebrating another achievement – it has been recognized as the 2019 Airline of the Year by industry publication Global Traveler.

“The success we have had transforming our airline into a leading global carrier is being recognized worldwide and we continue to invest in new aircraft, onboard services, airport amenities and a new loyalty program to build on our leading position,” Rovinescu said.

“Mostly, however, this award recognizes the hard work of our employees and their commitment to deliver customer service excellence every day, for which I thank them,” he added.

The airline said Global Traveler’s advisory board weighed the nominees’ financial data, safety records, product offerings, onboard menus and overall image as a brand before selecting Air Canada as Airline of the Year.

Since 2010, Rovinescu has presided over a rapid expansion of the airline, investing $12 billion on new aircraft and routes.

The airline’s popular Maple Leaf Lounge, featuring dishes prepared by celebrity chefs, is also part of his program to elevate the travel experience.

Rovinescu has been at the helm of Air Canada since early 2009.

Images are courtesy of Air Canada.