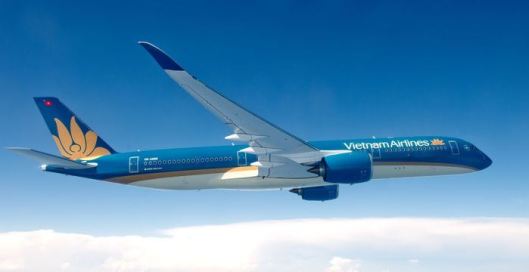 Vietnam Airlines has been in the news a lot in the past few weeks – all for good reasons.

The airline’s brand new Boeing 787 Dreamliner was one of the main attractions at this month’s Paris Air Show.

Today, the Vietnamese flag carrier has received its first Airbus A350 XWB (above) through a lease agreement with AerCap.

It will become the second airline in the world to operate the aircraft after Qatar Airways. 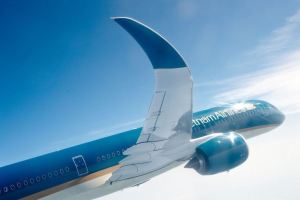 The A350-900 will be first used on a domestic route and then for regular non-stop service between Hanoi and Paris.

The aircraft is configured with a three-class layout, with 29 seats in Business Class, 45 in Premium Economy and 231 in Economy, Airbus said.

“The arrival of the A350 XWB marks the start of a major upgrade of our long-haul fleet,” said Trinh Ngoc Thanh, executive vice-president of Vietnam Airlines.

“Combining the latest technologies, a wider cabin and the highest levels of comfort, the A350 XWB will enable us to fly our passengers in style whichever class of travel they choose.”

In all, Vietnam Airlines has 90 aircraft and flies to more than 50 cities, including 21 international destinations.

Airbus has received 781 firm orders for the A350 XWB from 40 customers worldwide.

Airbus has won firm orders for 124 aircraft worth more than $16 billion at the Paris Air Show, the European manufacturer announced in Le Bourget, France, on Thursday.

In addition, the company has also received commitments for 297 airplanes worth another $41 billion. 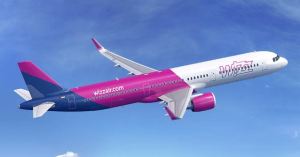 “Our latest forecast for 32,600 planes in the next 20 years is being proved correct,” said Airbus CEO John Leahy.

“The orders and commitments at this year’s Paris Air Show demonstrate three things; Asia is powering the growth, we are leading in single-aisle and widebody and our A321neo is the aircraft of choice in the middle of the market.”

The Budapest-based Wizz Air is the largest low-cost carrier serving Eastern and Central Europe and operates an all-Airbus fleet.

“Thanks to our rapidly growing A320 fleet, we’ve become one of Europe’s leading carriers,” said Jozsef Varadi, CEO of Wizz Air.

Boeing, meanwhile, won orders and commitments for 331 aircraft worth just over $50 billion. That included a firm order from AerCap for 100 737 MAX 8s, valued at $10.7 billion, announced on the second day of the week-long show.

“Boeing is focused on execution and remains on track to deliver between 750 and 755 airplanes in 2015, a new industry record,” the American manufacturer said Thursday.

“Upcoming commercial development program milestones scheduled before the end of this year include factory rollout of the 737 MAX and firm configuration of the 777X.”

Canadian aircraft maker Bombardier, which debuted its brand new CS300 at the show, did not win any new orders for the single-aisle aircraft.

Images are courtesy of Airbus and Boeing. 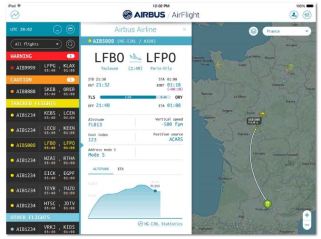 The platform will be handled by Airbus ProSky, the air traffic management subsidiary of the European aircraft manufacturer.

The project was announced on Wednesday, the third day of the Paris Air Show in Le Bourget, France.

“Knowing precisely where aircraft are – and where and when they will be anywhere – brings major benefits to the entire aviation community,” said Sebastien Borel, Airbus ProSky general manager.

He said AirFlight would tackle three major items: provide flight tracking as required by the authorities, optimize airlines operations with statistical data on fuel, holding, and airport taxi situations, and provide a base for reliable information on airport demand and arrival time.

Following the disappearance of the Malaysia Airlines Flight MH370, the International Civil Aviation Organization has recommended the adoption of a new aircraft tracking standard from 2016.

Tracking image is courtesy of Airbus. 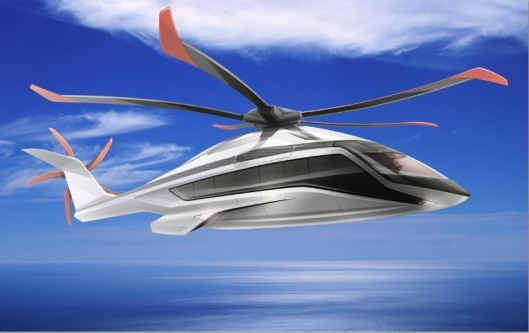 Airbus has announced plans for a new heavy-lift helicopter at the Paris Air Show.

With a concept phase of two years, the X6 (above) will be tailored for the civilian market, the European manufacturer said.

It will initially target oil and gas missions and will also be perfectly suited for search and rescue, VIP and other applications, it said.

“Major marketing, architecture and design choices for the twin-engine aircraft will be assessed to meet customer operational requirements during the concept phase,” Airbus said.

“It will set new standards in the industry not only for design, but for its production strategy as well, as we will rely on the industrial capacities of our core countries, including the upcoming pillar in Poland,” said Guillaume Faury, president and CEO of Airbus Helicopters.

“Our objective is to bring to the market the most efficient helicopter solutions adapted for how our customers’ needs and the industry itself will evolve in the future.”

One of the major innovations to be integrated on the X6 is the fly-by-wire flight control system, the company said.

“Once adequate program maturity has been achieved in the concept phase, a subsequent development phase will follow, leading to an X6 entry into service anticipated in the 2020s,” the company said.

Image is courtesy of Airbus. 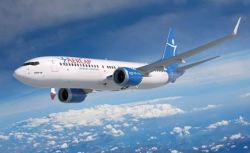 In its Current Market Outlook released last week, Boeing forecast that the world will need almost 27,000 single-aisle airplanes over the coming two decades.

On Tuesday, at the Paris Air Show in Le Bourge, the American manufacturer announced the biggest order of the show so far – for 100 737 MAX 8s from aircraft leaser AerCap.

“This order complements our existing order book in the single-aisle category and is in line with our customer needs and our fleet strategy of leasing the most-in-demand and technologically advanced equipment,” said AerCap CEO Aengus Kelly.

“We see significant market appetite for this aircraft type from our diverse customer base spanning approximately 90 countries around the world,”

The 737 MAX is the fourth generation of the Boeing 737 family. It is under development. Boeing said Tuesday assembly of the first 737 MAX had begun as scheduled in May.

“The 737 MAX 8 will give AerCap’s customers a unique advantage in the heart of the single-aisle market,” said Boeing Commercial Airplanes president and CEO Ray Conner.

A global leader in aircraft leasing, AerCap has 1,800 aircraft that are owned, managed, or under contract to purchase.

Minsheng Financial Leasing signed a Memorandum of Understanding with Boeing for the purchase of 30 737s, a mix of Next-Generation 737 and 737 MAX airplanes.

Ruili Airlines announced that the airline has committed to purchase 30 737 MAXs.

Korean Air announced the airline’s intention to purchase 30 737 MAXs and two 777-300ER jetliners, with options for an additional 20 737 MAXs.

Korean Air signed a Memorandum of Understanding with Airbus to acquire up to 50 A321neo aircraft.

Images are courtesy of Boeing and Airbus. 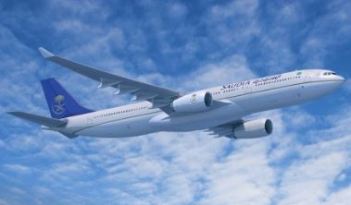 The 51st edition of the Paris Air Show opened Monday with major aircraft manufacturers announcing a series of deals worth billions of dollars.

Here are the highlights of Day One:

Airbus says Saudi Arabian Airlines will become the first airline in the world to operate the new A330-300 Regional.

ATR announces 46 firm orders and 35 options for its regional aircraft. That includes the sale of the 1500th ATR aircraft.

Images are courtesy of Airbus, Bombardier and ATR. 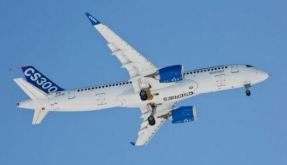 On the eve of the opening of the Paris Air Show, Bombardier has announced that the performance of its all-new CSeries aircraft is “better than advertised.”

It said, based on flight tests results, its CS300 and CS100 airplanes exceeded their original targets for fuel burn, payload, range and airfield performance.

“In addition, the CSeries aircraft are on track to meet noise performance targets, making them the quietest commercial jets in production,” the Canadian aircraft manufacturer told a special media event in Le Bourge.

The long-delayed CS300, designed for the 100- to 149-seat, single-aisle market, is making its air show debut in Le Bourge, four months after its maiden flight.

The aircraft is expected to enter service in late 2016.

Bombardier believes the CS300 offers the best seat-mile cost in its category and is ideal for a range of routes from short-haul to longer transcontinental markets.

Certification for that aircraft is expected in the second half of this year with commercial flights starting shortly after that.

Bombardier has won 243 firm orders for the CSeries aircraft, 180 of them for the CS300.

The 51st edition of the Paris Air Show opens Monday.

The week-long event has attracted more than 2,200 exhibitors from 45 countries including 18 from Canada. 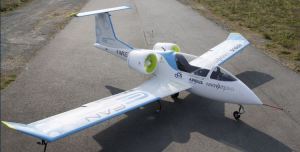 The Paris Air Show doesn’t open until Monday, but one airplane is already creating a lot of buzz.

Airbus has unveiled the E-Fan, the environment-friendly plug-in plane.

The European manufacturer says it will be the world’s first series production electric plane and will open the way for a new era in air transportation that is environmentally-friendly and highly efficient.

“The E-Fan demonstrator will be followed by serial production versions – first, the two-seat E-Fan 2.0 version for basic pilot training, then by the E-Fan 4.0, a four-seat airplane for full pilot licensing and the general aviation market,“ the company says on its website.

The first flight for E-Fan 2.0 is planned for late 2017. It is expected to go into service the following year.

Boeing has released a stunning new video of the 787-9 Dreamliner soaring above Washington state ahead of next week’s Paris Air Show.

The Vietnam Airlines Dreamliner is scheduled to fly during the show that opens June 15.

The video was filmed above Moses Lake, Wash. It highlights technical manoeuvres that showcase some of the airplane’s many capabilities.

The Dreamliner video is courtesy of Boeing.