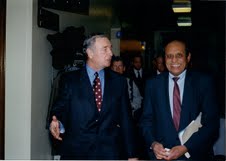 It was the chance reading of an article in the Buffalo News 17 years ago that propelled Mobeen Khaja to establish what has now become a major annual event in Ottawa’s social calendar.   “I was on a visit to Buffalo and I saw this story about Hillary and President Clinton hosting an Eid dinner at the White House and I thought why we can’t have similar events in Canada,” Khaja said last week.Eid is a major Islamic holiday.Not before long, Khaja, then an accountant in Toronto, was on his way to bring members of various faiths together to celebrate Eid.

With the help of his long-time friend and Liberal MP Dan McTeague, he hosted the first event in May 1996 on Parliament Hill.

“Dan said, ‘You bring people and the food, I will bring the Members of Parliament, Senators and Finance Minister Paul Martin.”

That was a big success.

Political leaders and members of the diplomatic corps now join Muslims every year to celebrate Eid on Parliament Hill.

A few years later and with the help of corporate and individual sponsors, Khaja and his team were also able to expand the program to Queen’s Park and City Hall in Toronto.

The events are organised under the banner of the Association of Progressive Muslims of Canada, a group Khaja has headed since he founded it in 1998 to promote peace and harmony.

For his efforts to build bridges of understanding between Muslims and other faith groups, Khaja was awarded the Order of Ontario in 2011.

The citation said he was honoured for “his contribution to promoting peace and cross-cultural understanding between Muslims and other religious groups and ethnic groups.”

Now retired, Khaja is devoting most of his time just for that.