He noted the airline’s humble beginning in 1985 with two leased airplanes and its exponential growth in the past three decades, becoming one of the world’s largest airlines with 240 aircraft in service and another 267 on order.

“Our vision for Emirates for the next 30 years is rooted in innovation: to reinvent aviation with new products, technologies and services.”

Today, the world’s largest manufacturer of airplanes predicted that airlines in the Middle East will need 3,180 new airplanes, valued at $730 billion, over the next 20 years.

According to the Boeing Current Market Outlook, released ahead of next week’s Dubai Airshow, 70 per cent of that demand is expected to be driven by rapid fleet expansion in the region.

Single-aisle airplanes will command the largest share of new deliveries, with airlines in the region needing more than 1,400 aircraft, Boeing said.

Twin-aisle aircraft will account for a little under half of the region’s new airplane deliveries over the 20-year period, compared to 23 per cent globally, it added.

“Traffic growth in the Middle East continues to grow at a healthy rate and is expected to grow 6.2 per cent annually during the next 20 years,” said Randy Tinseth, vice-president at Boeing Commercial Airplanes.

There is a reason for such rapid growth. 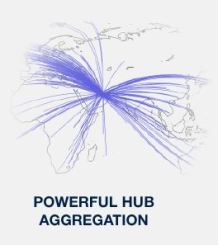 “About 80 per cent of the world’s population lives within an eight-hour flight of the Arabian Gulf.” Tinseth said.

“This geographic position, coupled with diverse business strategies and investment in infrastructure is allowing carriers in the Middle East to aggregate traffic at their hubs and offer one-stop service between many city pairs that would not otherwise enjoy such direct itineraries.”

The Dubai Airshow runs from Nov. 8 through Nov. 12.

Images are courtesy of Emirates and Boeing.